My Days on the Job in Hiroshima

After graduating in 1973 with a degree in East Asian Languages & Civilizations, I headed to Japan to figure out if I wanted to make Japan the focus of my future career. Four years at Harvard had left me unsure. Eizo Toda, the father of an exchange student (Sekio Toda) who had lived for several months with my parents offered me a low-level, part-time job with his company, then called Mazda Unyu Hiroshima, whose primary business was transporting Mazda cars, trucks and parts both domestically and internationally. Toyo Kogyo also made Ford Courier pickup trucks which were also transported. He placed me in the Gyomuka or Business Section. Italicized below are excerpts from the journal I kept.

My job description was non-existent so neither I nor my co-workers knew exactly what I could or should be doing during my half-days on the job. Sugimoto-bucho, the section chief, gave me a desk at the extreme right of a group of four desks each of which faces another desk, making a total of eight. On my left is Yokobayashi; in front of me is Inoue. Next to him and across from Yokobayashi is Mae, the youngest member of the group. Behind Inoue and Mae is a chalkboard with the ship schedules, a world map to the left and a calendar to the right. Typewriters sit on a shelf underneath. To my left, above the plain sliding windows on the dull, gray walls, are a series of photographs of what I assume to be the company’s ships. Through the windows I can see a part of the enormous Toyo Kogyo complex. The office is very plain-looking…Desks crowd each other (as do people) and even a small table and set of chairs, presumably for conversation, are wedged in between cabinets and newspaper racks and partitions. My desk is amply equipped with pencils, pens, erasers, stapler, scissors, glue, stamp pads, note books, etc.

When I arrive around 8:15 a.m. with Mr. Toda and his driver, Kimura, a cup of ocha is patiently waiting on my desk. Bells chime via the loudspeaker system and everyone rises for calisthenics in time to music and instructions. Exercises last only a few minutes and are hardly strenuous; nevertheless, everyone participates at least to some extent.

Yokobayashi was about my age. He was curious about me so he both asked questions and answered many of mine as he tutored me about the business. Yokobayashi explains in diagram form the exporting process. Our office receives information from Toyo Kogyo and types out invoices, bills of lading, shipping instructions, etc . These are distributed to the appropriate areas and cars are labeled and inspected by Customs and loaded onto ships.


The Gyomuka’s main job involved organizing the actual shipments of vehicles and parts. In a time just before computers took over this kind of work, it required a fair amount of labor to ensure that a specific vehicle moved efficiently from Toyo Kogyo’s Mazda assembly line to a ship headed for the port in the United States or elsewhere that would get it to the consumer or dealer who had ordered it. Every day Inoue-san mesmerized me as he shuffled and sorted cards representing vehicles.

Occasionally I translated some work-related documents, but more often I read materials my co-workers gave me. They ranged from pre-war elementary school books on “Morals” to the company policy manual. The manual included data on salary levels that were eye-opening. I was appalled to learn that a young man just out of high school earned more than a female college graduate. Not only that, but the pay schedule for women topped out at age 32. After all, if a woman couldn’t snag a husband by that age, she certainly didn’t deserve any opportunity to make a decent living herself, or so it seemed. Indeed, Nishimura-san, a graduate of Hiroshima University with an English major, like the other woman in the section (whose name I can’t recall) was required to serve the men tea periodically throughout the day and to take orders for lunch in the company dining room, among other duties. 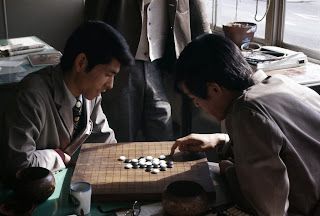 Lunch is at noon and the less said about it the better. From about 12:15 until the end of lunch break at 12:45 is the daily go-narabe round-robin at which I am the most consistent loser. The game itself is played on a squared-off board with white and black chips. The object is to get five of one’s chips down in a row. They may be horizontal, vertical or diagonal and about the only rule seems to be that one can’t have 3 in a row in two directions at once.

I most enjoyed the occasional opportunity to help my co-workers actually drive the new Mazdas from a giant parking garage/warehouse down to the ships at dock for loading on board. Even more fun were our Tuesday evenings out on the town.

Nights on the Town

With my best friend, Masashi Izuta, and an ever-changing cohort of Mazda Unyu staff and denizens of my favorite haunt, we made the rounds of izakaya and other bars in the Nagarekawa area of downtown Hiroshima pretty much every Tuesday night.

Most often we met at Ishimatsu, a friendly place which serves mostly grilled fish of various types, along with beer and sake. The genial 'master,' often in t-shirt and two or three-day growth of beard, runs a monthly bowling tournament followed by a party in his upstairs room.


We often finished up the evenings with nightcaps of oden and chazuke along with more beer and cigarettes  at a tiny oden-ya called Yamanobe, run by a 40ish woman with a motherly smile. All too often my night ended by being thrown into a taxi and rolling out when it reached the Toda family home in the Eba neighborhood. [No photos available :)]

On some weekends co-workers invited me to join them and, sometimes, their families on excursions to places of interest.

One autumn Sunday Izuta and Inoue took me to Onomichi, an old port town about 45 miles northeast of Hiroshima,which is packed with very old Buddhist temples. I’ve since learned it was also the setting for Ozu’s film Tokyo Story. Upon our arrival in Onomichi, we met a Miss Ueno with whom we had been connected by the mama-san from Yamanobe.


Other weekend excursions with co-workers included an October matsutake mushroom hunt with Kimura and several of the other company drivers. We feasted on the large, difficult to procure, mushrooms in various forms – grilled, mixed with rice, and in sukiyaki.


In mid-November, Yamai took me to his house in Kumano, in the mountains a few miles east of Hiroshima, to help with reaping the rice crop. Sunday morning we headed over to the fields where Yamai-san’s father had set up the machine which strips the rice kernels from their stalks. The process was a simple one – carry the dried rice plants, which have been bundled and hung in two layers over bamboo poles, to the machine, shove them through and then stack the stripped stalks off to one side.


The countryside was an uninterrupted pleasure, from the women in mompei (the baggy patterned bloomer-like pants) and straw hats, faces surrounded by towels worn like bonnets, to the ubiquitous kids, running, jumping into the piles of rice stalks and, of course, crying for their mothers.

From the vantage point of forty years, in 1973-74 I enjoyed a remarkable opportunity to learn about  Japanese corporate culture and business practices during my six months in the Gyomuka at Mazda Unyu Hiroshima. Even better, I had the opportunity to meet and spend time with  some wonderful co-workers who opened their homes to me and shared family time and cultural interests with me.


And so, having come to Japan to figure out what to do with the rest of my life, I decided to continue studying about Japan - returning to the U.S. in 1974 for graduate studies at University of Michigan, leading to the once-in-a-lifetime opportunity to start and head for 28 years a museum devoted to sharing Japanese culture with Americans. A much better choice than making sure that those Mazda vehicles found their way to their American owners.

Posted by Larry Rosensweig at 2:28 PM