Students in Japanese high schools typically join one club which meets and holds activities year-round. I joined the Judo Club in January, 1969, and quickly realized that I would have a difficult time getting myself in shape to keep up with my teammates and an even more difficult time mastering the throws and other techniques. My single advantage was having wrestled in middle and high school. I spent a lot of time learning to fall and hit the mats without injuring myself. These are my journal entries and photos about that experience. 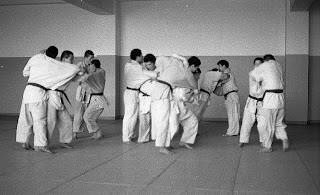 Jan. 23:  My first judo lesson is over and I’ve never felt more beat up in my life. I expected to be sore and tired, but on top of that my shoulders are sore and I’m sure I’ll have a dozen black and blue marks on me tomorrow. All I did was practice falls on the tatami – which is not as soft as a wrestling mat!

Jan. 24     Struggled through another judo practice today. The guys were really fantastic – helping me not only with the falls and throws, but stretching me out and taking care of my shoulders. 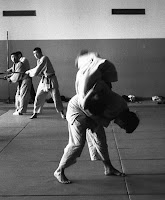 Jan. 25      Had a real rough time sleeping last night – every time I squirmed to get comfortable, some part of my body cried out in pain.

Jan. 29     I don’t believe it! Today we got in a little running out in the snow – BAREFOOT. My feet were numb and the others had it worse because they were having a regular practice in the snow while I just ran in place. 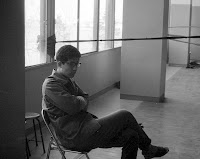 Feb. 5     Judo was very discouraging. I still can’t do that first [shoulder]throw (seoi-nage) right, first because I’m a klutz and second because everybody tells me to do it a different way. And the coach is a big help – he laughs at me.

Feb. 9     Got up much too early to go to Furukawa for the judo matches. Only 3 weight classes so only 3 Ikuei boys competed and none of them did real well. One lost to the eventual champion in the quarterfinals. I still don’t really understand how you win a judo match, but it was fun to watch for a while. Meanwhile, I caught a miserable cold sitting there in that freezing gym for five hours. 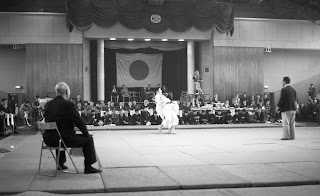 Feb. 21     At judo I felt like I was getting tough. I kept up with everybody on most of the exercises except pushups. Not too tough!

Mar. 29    Packed up and moved to Ikuei for the gasshuku (sleep-over training camp) and started practicing judo. Found I couldn’t even finish one serving of the meals while even the little guys had two. Sacked out after lunch until afternoon practice which was a killer, too. Had my first match – a short one with Akama - I won!! Couldn’t finish dinner again.

Mar. 30    Up at 6 a.m. for some running and exercises. Then breakfast of a can of mackerel and rice. Yummy! Another killer practice in the morning and another lunch I couldn’t finish, then another blissful rest before afternoon practice. I made it thru dinner tonight and again walked up to the public bath and scalded myself. 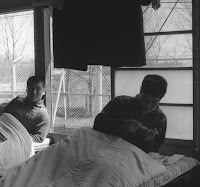 Mar. 31    6 a.m. again and some running, distance jogs, hill climbs, sprints, etc. It kind of felt good to do some regular running again. After breakfast I decided I definitely was through with the gasshuku, tho. To be honest, I couldn’t take it. I feel bad about being such a pussy, but I could hardly walk on my damn infected foot.
(Apparently, my foot became infected from a combination of running barefoot on snow and ice and repetitive kicking of hard objects to toughen up the foot.)

April 10   Wow! I’m a judo senpai (senior status) now! I feel pretty much at home with the judo guys and when the new kids come, I’ll probably feel like an old-timer. Got my name put up in the club room – now I’m legit.
(The Japanese school year begins in April and runs through March) 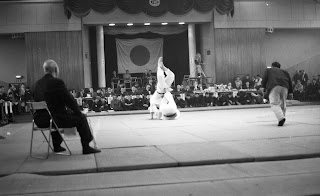 May 3   Took my big test for black belt in judo today and, wonder of wonders, I won both times! So I guess I’ll get the black belt.
(My wrestling experience helped a great deal, as I won both matches essentially by holding my opponent on the mats after countering his attempted throws.) 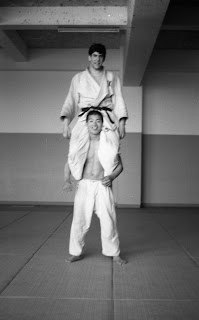 May 6   At judo I got my official initiation as a black belt – Suzuki choked me till I passed out. It wasn’t too bad and I felt tough after it.
(To this day, I get extremely uncomfortable when anyone puts hands on my throat.)

May 7   After school Coach Kosaka brought over the official paper about the black belt. So I filled it out, then went to practice. Sasaya, the 120 lb. animal, beat the crap out of me both standing and newaza (on the mat).
(In the photo I'm wearing my new black belt and praying that Sasaya doesn't hurt me!)


June 10   Judo club had its going-away party for me and gave me a new judo-in (uniform) and kuro-obi (black belt). Also my official diploma came in from Kodokan Judo and an Ikuei Judo Club tie clip. I was really sad and felt guilty about how little attention I had paid them while they were all so good to me. But I hope they believed I meant it when I said we were all like kyodai (brothers).

The good news of my judo club experience was that I survived it longer than previous exchange students and that I somehow managed to earn the black belt. I also learned some colorful words and expressions from my teammates - ones that had not been taught in any of my classes,  at my tea ceremony lessons or by my host families.

Posted by Larry Rosensweig at 3:17 PM