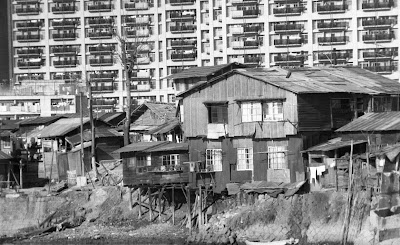 While living and working in Hiroshima, Japan, in 1973-74, I had the opportunity to explore the city, often by bicycle. I was fascinated by a slum neighborhood that no one would talk about with me. Located just across the Aioi Bridge to the north of the so-called "Atomic Bomb Dome," it stretched out along the banks of the Ota River in the Motomachi district right in the center of the city. Prior to the atomic bombing, it had been government property, including a military base. Postwar it became a squatters' village. Today the slum has been replaced by a variety of civic buildings and park areas. I do not know what became of the people who once lived there.
From the October 24, 1973, entry in the journal I kept at the time: 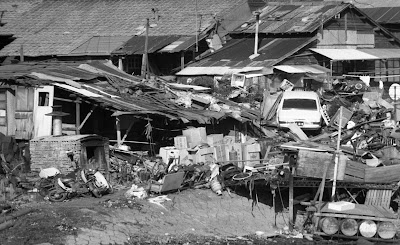 From Peace Park I decided to head over to what I think is the only legitimate slum in Hiroshima. 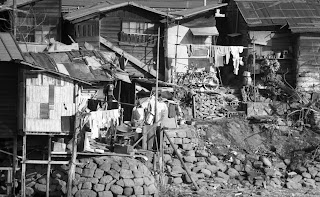 Mr. Toda [in whose house I was living] explained that the area had been government land into which people moved after the war.  At the time no one could have begrudged anybody's converting unused land into badly-needed shelter.
However, once established there it became impossible to evict people from their shacks and they remain to this day. 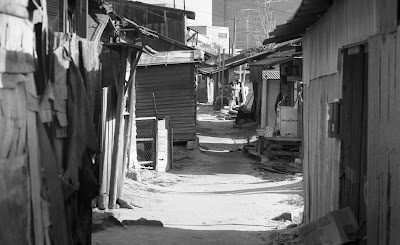 I was a bit edgy riding my bicycle down the single rock-strewn path in the center of the settlement.
What I saw was an incredible maze of tightly packed, decaying hovels peppered with piles of uncollected trash, drying laundry, assorted bicycles, tricycles and beat-up cars. 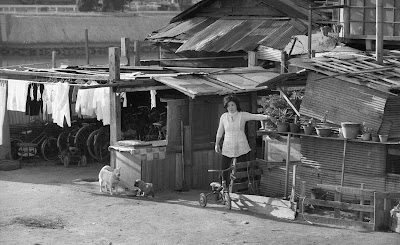 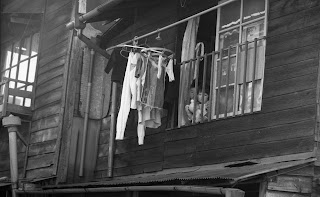 There were surprisingly few people about, but no lack of signs of life, if few signs of amenities. Apparently there is no electricity and probably no running water or other such public services.
In one small clearing I spotted an old-fashioned wood-topped kama [pot for cooking rice] perched atop a rusted old can in which a wood fire was burning. 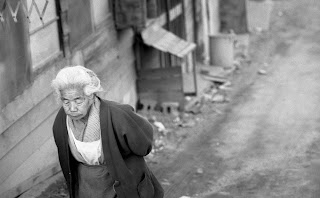 All in all, the neighborhood is pretty squalid, but full of humanity and deserving of more interest and attention, not only from me, but from the more fortunate citizens of Hiroshima. 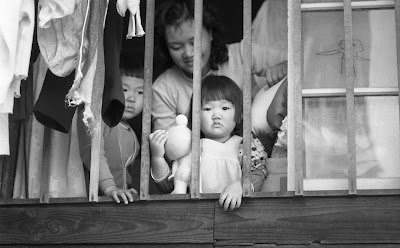 Posted by Larry Rosensweig at 6:06 PM